Women In Business: How To Play To Your Strengths To Get Heard

Many of our female clients struggle with various workplace challenges, from being told to ‘smile more’ or that they are ‘too passionate’. While men also have communication challenges at work, there are common themes for women that often lead them to feel disempowered, ignored or struggling to fulfil their potential.  Some worry about being overpowering or too emotional.

When women come to us anxious that they’re not being taken seriously in the workplace, we understand. The system has created an uphill struggle. When a woman voices a point – but is ignored – and then a man makes the same point in the same meeting, and all heads not in agreement – the frustration can feel overwhelming.

Advice often tackles the negatives, but what is often overlooked is that women have incredible strengths when it comes to communication. And both men and women will benefit when these strengths are recognised. Women definitely don’t need to act like a man to succeed at work. They have all the tools they need to succeed already.

We lay out four of them here:

Women have an advantage when it comes to building rapport - making others feel important and feel heard. It’s not just asking questions and showing interest, women also do this by keeping eye-contact, often using a relaxed, softer gaze, and with nods and smiles. In general, they have far more capacity for inviting others to feel relaxed.

If someone is dominating a conversation - asking questions is a great way to take back control of the conversation in a calm and grounded way. It maintains rapport, even encourages it, and yet puts you back in the driving seat.

Often, women are overheard in meetings to preface our ideas with phrases like, “This might be a bad/crazy/off-beam idea but…” This is often motivated by the desire to build rapport, and maintain equality around a table; both admirable objectives and central to leadership. After all, one of the hallmarks of an effective leader is the ability to give up the need to be “the expert”. But if we are heard to downplay the validity of our ideas then we can’t expect others to take them seriously.

So how can you achieve your objective to be a warm, inclusive leader in other ways? Rather than prefacing your ideas with disclaimers, introduce them with a question. “What about…” Or alternatively state your idea with conviction and then conclude your idea with invitations. “What do you think?” “Do you think this could work?” “What’s your take on it?” Inviting people to contribute their own original thinking after you state your idea empowers your staff and ensures that they feel valued. 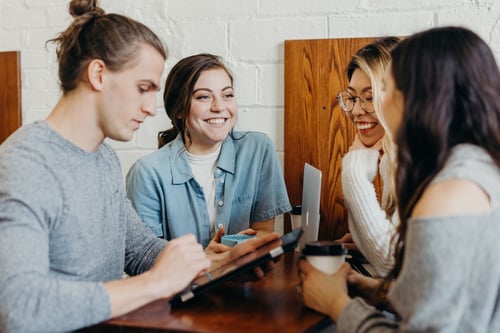 Eye contact, smiles, open body language, leading sounds – all of these are active listening. If none of those are present then it can get pretty uncomfortable. But women are more likely to listen actively to someone - and in return you will find that the speaker will give you more detail, and become more receptive to what you have to say.  It's also far easier to flow into a natural and comfortable conversation.

Good quality listening is one of the easiest ways to show someone they are important to us. When we give another person our attention it tells them we value them.

Alongside their rapport building skills, women have a powerful ability to pay attention. Debra Graham writes that “during conversations, women spend more time looking at their partners than men do.”

This ability for active listening can sometimes be wrongly interpreted as silence or passivity by a male-dominated boardroom, but it is this strength that enables women to respond much more effectively.

Empathy is perhaps one of the most effective communication resources at anyone’s disposal. And women do tend to have a more natural capacity for empathy than men. The findings of recent Cambridge study were published in Translational Psychiatry. Varun Warrier, a doctoral student in neuroscience who led the study said, “The highest possible score in the EQ test is 80. We saw that men score, on average, 40, and women score, on average, 50.”

Particularly when leading a team, empathy is invaluable. It means women are more inclined to perceive and tune into issues people are facing, so they can deal with problems before they get out of hand. Their empathy also creates a sense of safety within a team, so that colleagues are more empowered to take risks and express greater creativity. The value of this cannot be overstated.

Self-sabotaging habit: Be aware that in an attempt to empathise, we can be reluctant to offer feedback that could be interpreted as harsh, or to give a direct order when one is needed. Most of the time, empathy will work in our favour, but there are times when we will need to express ourselves in other ways.

In a study into body language, Arseny A. Sokolov found that women “exhibit higher sensitivity to non-verbal cues.” They are usually more attuned to how their behaviour affects others and this sensitivity can enable them to respond more effectively to a situation.

Deborah Tannen writes in HBR’s article “The Power of Talk: Who Gets Heard and Why” that, “From childhood, most girls learn that sounding too sure of themselves will make them unpopular with their peers—although nobody really takes such modesty literally. A group of girls will ostracize a girl who calls attention to her own superiority and criticize her by saying, “She thinks she’s something”; and a girl who tells others what to do is called “bossy.” Thus girls learn to talk in ways that balance their own needs with those of others—to save face for one another in the broadest sense of the term.

This reading of one another, and of a group, has been misinterpreted by male boardrooms as a reserve or hesitancy. But it’s actually a strength that enables a woman to harmonise with their environment and avoid unnecessary conflict.

Self-sabotaging habit: It’s worth being aware that being responsive and attentive can prevent us from rocking the boat, because we prioritise being liked. Sometimes something needs to be said that causes conflict – and sometimes that conflict is helpful and necessary.

It can seem sometimes that the only way to get ahead as a senior leader in business is to act more like a man, but that’s not true. We need a balance of traits to make great managers and leaders. Of course, there are men that will identify more with female characteristics and vice-versa, but all are important, and all need to be valued.

There are tremendous strengths to a woman's approach and it’s important to capitalise on these skills and learn how to amplify them in the workplace. You don't need to dominate to have impact.

But you can do this in tandem with identifying whether there are any self-sabotaging patterns, such apologising, prioritising being liked, and trying to avoid boasting, that may be undermining your impact. Particularly, in status conscious cultures that misinterpret these behaviours as lacking in confidence. It's about developing an awareness of your communication patterns and developing control over them, so that you can convey your expertise persuasively.

If you'd like to learn more about what we do, book a FREE 15-minute Discovery Call to discuss your goals with our Client Success Manager.

Download our free eBook for some amazing tips from our trademarked method.