Hats Off To Harry - Born To Be Royal

Prince Harry used to be the naughty prince, the nation’s younger brother, who was known more for his passion for partying than for typically Royal behaviour.

And yet after some hair raising times in his twenties, he has stepped confidently into his role, using his position to give a voice to many who have been side-lined, disenfranchised or forgotten. He has done so with responsibility, grace, good will and a gentle determination, which reminds many of his mother. So what can we learn from his communication style?

When you imagine what it’s like being a member of the Royal Family you don’t necessarily think about struggling with shyness, mental illness and actively and intelligently choosing how to wield your considerable influence.

And yet, much to our admiration, in recent years this is exactly what Prince Harry has done. He has brought attention to the challenges of mental health issues, admitting in the process (to an audience of millions) that he too struggled with them and that he tried to hide the problems he was facing for a long time.

In being prepared to be vulnerable, he has charmed so many who have watched him. With his ease, warmth and natural sweetness, it’s easy to forget that he was born into a very public position, with no choice in the matter.

Prince Harry recently admitted he is scared of public speaking. This fear (officially called glossophobia) is shared with an estimated 75% of the population. But, like his great-grandfather, he has overcome his nerves to fulfil his public role, and he is making quite a decent job of it!

In my book, The Communication Equation, I lay out a very simple usable equation that can help guide us to great communication. It is called ACE.

From this standpoint, we can deconstruct how Prince Harry is doing such a great job.

Authenticity in communication is about two fundamental ideas. The first is genuinely caring about what you are saying, enough to want to share those ideas with other people. The second is to make sure your listeners know that you care.

Prince Harry has the ability to present his own experience, without guile and with humility and often self deprecation. But how does he let the audience know that he cares?

He doesn’t speak from a lectern or hide behind notes. Instead, he addresses the crowd directly with no physical barriers

His body language is open, and he stands tall. He uses his hands to emphasise his points, and in moments where he is particularly passionate, he stands still and uses his hands and voice to deliver the full force of his argument

Verbal - how he says it

He speaks in individual units, at a steady pace, giving plenty of emphasis to his important words and pausing a lot so his audience can really stay with him.

He is punchy and emphatic. There is definitely room to improve on vocal range and intonation, but where he doesn’t quite use colour in his voice, he makes up for it by using emphasis, so it is easy to understand and feel what is important to him.

Connecting with your audience entails not only tailoring your message to your audience, but also listening and responding to them so that they feel valued.

For example in this recent speech during his tour of Australia, he takes care to appear informal and relatable. 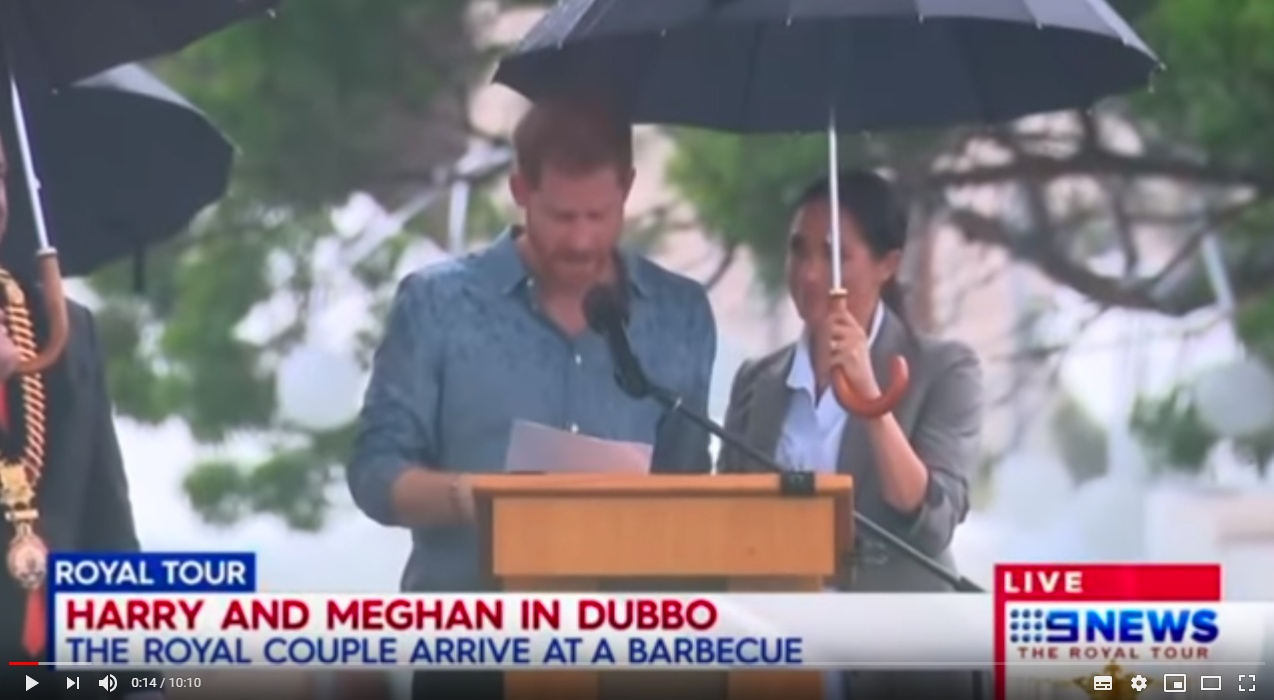 He wears a shirt with no tie. There’s no evidence of his Royal insignia or even a businesses suit. It’s a barbecue, and he wants to appear as any other guests might, in casual attire.

He speaks with his Meghan and they share looks and giggles as she shields him from the rain with an umbrella. He doesn’t use the Royal ‘we’ and speaks for both of them using the informal grammar ‘my wife and me’. When so many in his position may be put off by the rain and discomfort, he carries off being a thoroughly decent bloke by facing the bad weather conditions with good humour.

He speaks about his own farming experience, gently mocking his own abilities (being chased by a cow). IN the recent Australian drought, many farmers have had to kill their cattle to survive. Putting himself forward as the butt of the joke is a sensitive nod to their suffering without being too gloomy.

When he compliments them, he looks up from his scrappy notes and looks directly at them, as if this part of the speech is from the heart.

Prince Harry gives hugs to the children and old women of the crowds freely, he is warm, gentle and genuine, and as such, is extremely good at building connections.

As a result of being authentic and making the effort to connect with his audience, Harry is rapidly becoming one of the public's favourite Royals. Headlines of him and Meghan will attract most people's attention, and usually bring a smile to the face. I believe we are genuinely proud of our Prince come good.

Of course there are always ways in which he can improve. It’s a lifelong journey, with which the coaches here at London Speech Workshop are very familiar. But he's already a fantastic example of ACE communication.

If you’d like to learn more about The Serlin Method™ and how you can become an ACE communicator, please Book A Discovery Call to discuss how we can help you. Our effective communication courses start with a 1-hour Taster Session so you can start learning without any commitment.