Mistakes Bring Powerful Lessons - How Do You Communicate Them?

Results sometimes may not be what we expect them to be. But the extent to which they feel like a failure really depends upon our perspective.

We’re gradually moving through the final days of the decade, as if turning the final pages of a book, imagining what our sequel might be like. Self-reflection and self-improvement are in the air. There is an opportunity now to learn and adapt for the 2020s. To be prepared for what 2020 has to offer. But the way in which we do it will affect everything.

There are two very common traps we want to help you avoid. Refusing to own the mistakes we have made and the impact they have had - as this might paint a thin denial over the details of what has happened, and stunts learning. The second is framing something as a complete disaster, which results in negativity taking the reins in our lives or workplaces. Both of these reactions take us down routes we’d rather not go down.

So how do we respond effectively to our mistakes, bad judgements and even failures?

The quality of the picture is in how it’s framed

The words we use to describe past events matter more than we think. They sometimes have the power to have a greater impact than the events themselves. Often, if we describe something as a “complete disaster” we leave close to no room for redemption, or nuanced learning. Our learning process gets reduced to “let’s try to make sure it doesn’t happen again.”

We recently worked with clients who were about to give a year-end presentation to investors. It had been a pretty bad year financially and they were considering covering it up, denying responsibility, and even admitting that they’d screwed up. None of these options would have helped them to achieve their goal, which was to prove that they were worth investing in.

Instead, by using the re-framing technique, they were able to find a way of owning up to their errors by turning them into powerful lessons. The way in which they communicated the so-called failings of the past year was by focusing on where these failures had helped them to learn, grow, make new plans for the future and most importantly to not reproduce these errors.

If we call the same past event, “a powerful lesson,” we find ourselves in a better position than if we were to run away from our mistakes. The words invite positive reflection, maybe even a playful investigation and they project a sense of hope upon the future.

This is the framing effect in all its splendour. Undoubtedly, the exact same facts can appear positive or negative depending on the choice of focus. 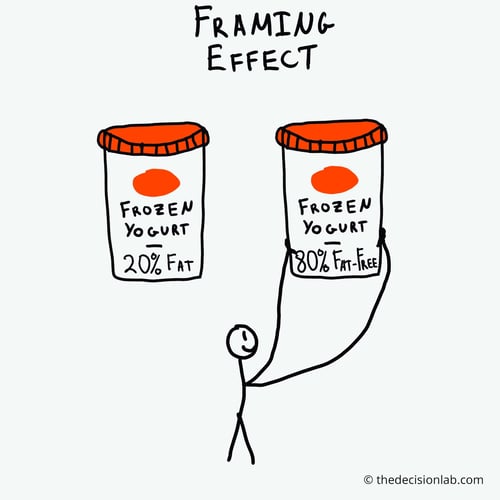 Research reveals that consumers will always gravitate to that which advertises the presence of a positive rather than towards the slightest presence of a negative - even if on paper, the same basic information is communicated.

This isn’t at all about smoothing over a painful experience, it’s about positioning yourself, and your company, to make the most of the hand you have been dealt and turn whatever negative situation into your favour.

There is definite power in ownership

When we communicate our mistakes to others - whether colleagues, press or friends - laying the responsibility elsewhere is rarely helpful. Even if aspects of past events were beyond our control, it is worth acknowledging the weaknesses that played their part in the mistake which has been committed. Obfuscating or shying away from responsibility always erodes trust - and trust is something you never want to lose, considering how hard it is to earn it back once it is lost.

For the same reasons, be wary of explaining a situation in a way that deflects rather than owns responsibility. Absolutely nobody likes to hear something that sounds like an excuse rather than an apology. Excuses lead to disconnect, instead of the connection apologies can offer, which is what you’re trying to build here.

You have to be honest with yourself first, before you worry about being honest with others. You made a mistake - and that’s okay. It’s a side effect of being human. Owning up to your mistakes is owning your humanity. It’s having control over an uncontrollable aspect of life. It also feels authentic and it has the undeniable ability to draw the right kind of people to your side.

Consider exactly what you have gathered from the experience - which weaknesses it has pressed upon, what problems it has revealed - and then start planning a way forward. What are you going to commit to? Where do you need help? What steps do you need to implement now, and which ones do you need to return to in a month, two months, or even a year down the line?

When you own your mistakes and plan the route ahead, you become able to communicate the positive that has emerged through the experience. You gain the ability to frame it with a sense of hope, and you can move into a place of respect. People might respond better than you assume they will. They know they are just as prone to error, just as imperfect, just as human. At the end of the day, everyone makes mistakes - it’s how we handle them that matters. 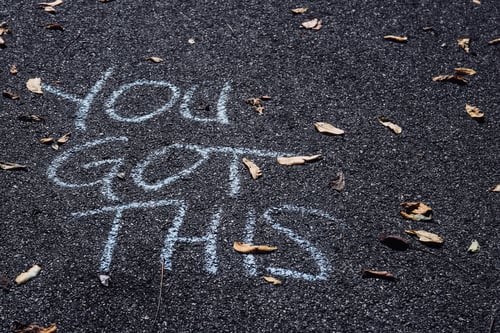 All about keeping it real

The thread linking all of this together is authenticity. It is admittedly impossible to effectively communicate without it. Even more so when it comes down to articulating mistakes. For there is no-one that appears more hollow than someone who purposefully ignores an elephant in the room. Authenticity is the key to turn a moment of failure into a moment of inspiration.

Whether you’ve had the best or worst year in business. Whether this year was the most uplifting or disappointing in your career - how you communicate the news can effectively change everything for the years to come.

The good news is that you can hone your communication skills to ensure that the engagement keeps growing. We’ve been developing communication methodologies for over a decade and we’re here to arm you with the skills you need, to adapt - and make the most out of both success and failure.

For more tips why not sign up to our regular newsletter  - which is packed full of tips that you can use the very same day, ideas that will resonate and we hope, delight. We pride ourselves on our simple, intuitive and accessible tools, that have a touch of creative magic.